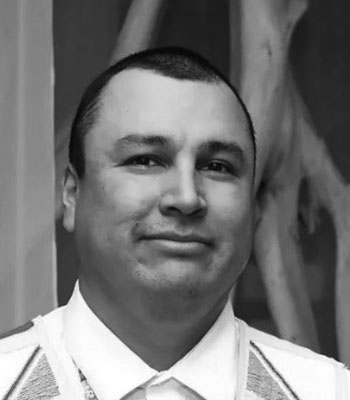 Cody Two Bears is an enrolled member of The Standing Rock Sioux Tribe. The Cannon Ball Community of the Standing Rock Reservation, where Cody grew up is in one of the poorest counties in the nation, and energy costs there are among the highest. Compelled to address this problem, in the wake of the #NoDAPL protests that gripped the area in 2016, Cody merged his cultural knowledge and desire for climate justice to create the organization Indigenized Energy. Cody created the largest solar farm on Standing Rock, the largest in the State of North Dakota. His work centers on the collaboration of Western science with Indigenous traditional knowledge. At age 26, he was the youngest elected tribal council member in history on Standing Rock. In 2013, he brought President Obama to the reservation. It was the former president’s only visit to a Native American reservation in his two-term tenure. Instead of having the president address the community, the organizers had the community’s youth address the president and tell their stories. Youth empowerment is also central to Cody’s work. He founded a program called Indigenized Youth which focuses on encouraging young Standing Rock Sioux tribal members to continue traditional ways of tending to the earth. They teach the children that renewable energy is just as attainable as iPhones and iPads — and it plays a big role in helping the community break cycles of poverty. Cody has been recently featured in People's Magazine, Rolling Stone, AlJazeera, Parade Magazine's 2019 renewable project of the year, USA Today, Solar Power World Magazine and many other national news outlets.