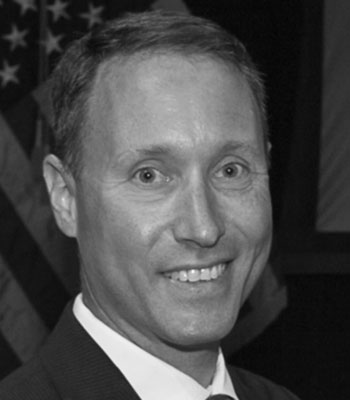 Office of the Assistant Secretary of Defense for Sustainment, US Air Force

Mr. Warshel received his commission in the United States Marine Corps 1991. After completing The Basic School in Quantico Virginia he was assigned to NAS Pensacola where he began his Naval Aviator flight training. Subsequently selected for the Jet Pipeline, Mr Warshel reported to NAS Meridian MS for intermediate and advanced Jet training and was selected as an F/A-18 Pilot. During 20 years of service, Mr. Warshel served as an FA/18 instructor pilot, a Joint Tactical Air Controller, Commanded an Infantry Company, and held several staff positions at Headquarters Marine Corps.

Following his military retirement, Mr. Warshel transitioned to the civilian sector and worked for the Marine Corps as a Readiness Analyst. Mr. Warshel’s service continued as he transitioned to the Army where he oversaw the $1.8B budget for the Army Counter IED/EOD Solutions office. During that time he was able to oversee the transition of high tech counter IED technologies through rapid fielding and in close coordination with JIEDO to support ground units in Iraq and Afghanistan. In 2013 Mr. Warshel was selected as the Deputy Director of Current Operations for the Office of the Assistant Secretary of Defense for Operational Energy and was subsequently promoted to Director. In that position Mr. Warshel directed energy resilience studies of bases in Iraq and Afghanistan that identified energy saving measures that reduced fuel convoys. He coordinated with OSD Policy to begin energy assessments of Plans to ensure energy supportability. When the office transitioned to the Deputy Assistant Secretary of Defense for Energy, Mr. Warshel oversaw the shore based nuclear power program for the Department. He also led initiatives to understand the resilience gaps in the Bulk Fuel supply chain and drove efforts to adapt to support distributed operations.

Prior to his current position, Mr. Warshel was Director of Operational Energy Resilience, Office of the Deputy Assistant Secretary of Defense for Energy, Pentagon, Washington, D.C.