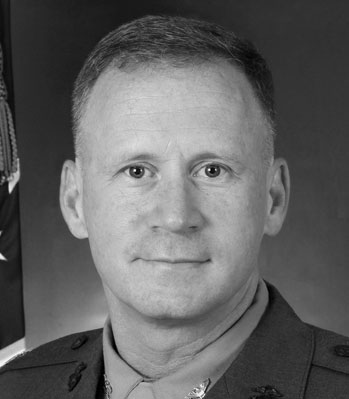 A proud native of Houston, Texas Colonel Ferry was commissioned as a Second Lieutenant upon graduation from the United States Naval Academy in 1992. Subsequently, was designated as a Naval Aviator in 1994 and was selected to fly the CH-46E Sea Knight.

Colonel Ferry has extensive operational and tactical experience in the CH-46E, to include deployments aboard amphibious shipping as part of the 26th and 31st Marine Expeditionary. His operational deployments include: Bosnia with the NATO Peace Implementation Force (IFOR) for Operation Joint Endeavor in 1995 and again in 1998 with the NATO Stabilization Force (SFOR) for Operation Joint Guard; Joint Task Force 535 to the Philippines for a Humanitarian Assistance/Disaster Relief (HA/DR) mission; to Indonesia and Thailand with Combined Support Force 536 for HA/DR operations in support of regional tsunami relief efforts; and Joint Task Force Caring Response a HA/DR effort to Myanmar. Colonel Ferry also deployed with the “Flying Tigers” of HMM-262 to Al Taqaddum, Iraq for Operation Iraqi Freedom 06-08.1. It was the squadron’s first combat operations since the Vietnam War.

Col. Ferry earned a BS in Systems Engineering from the United States Naval Academy (1992); a MS in Applied Physics from the Naval Postgraduate School (2001), and a Masters of National Security Strategy from the U.S. Army War College (2013).

Colonel Ferry has been is married to Mrs. Sondra Yvonne Ferry since 1994 and they have six children. He assumed the duties as the Commanding Officer, Marine Corps Air Station Cherry Point in July 2016.