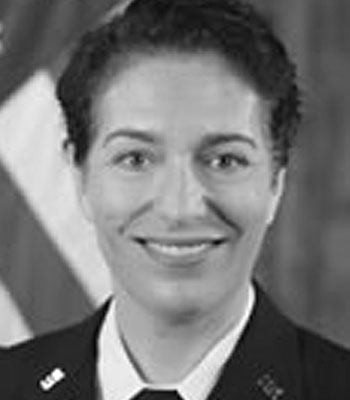 Colonel Gina E. Adam, commander of the U.S. Army Medical Materiel Development Activity, was commissioned as a Second Lieutenant in the U.S. Army upon her graduation from Shippensburg University of Pennsylvania with a Bachelor of Arts in Psychology. She began active duty in 1999 upon completing her doctoral studies in Cognitive Neuroscience from the University of New Mexico, and a Master of Arts in Experimental Psychology from Southeastern Louisiana University. Adam earned a Master of Business Administration from the Smith School of Business at the University of Maryland and a Master of Science in Strategic Studies from the Army War College. Her military education includes the Army Medical Department Officer Basic and Advanced Courses, Intermediate Level Education, Senior Service College, and Acquisition courses resulting in certification as a Science and Technology Manager and a Project Management professional.

Adam served as a Research Psychologist at the U.S. Army Aeromedical Research Laboratory at Fort Rucker, Alabama, studying pilot cognitive abilities in the cockpit such as crew coordination, the development of situational awareness, and multi-tasking demands of rotary-wing aviators. In 2004, she was reassigned to the U.S. Army Research Institute of Environmental Medicine, where she continued her scientific efforts to understand military cognitive performance, focusing on decision-making abilities of Warfighters in extreme environmental and operational conditions. In 2008, she was selected to serve as the Deputy Director of the Military Performance Division at USARIEM and was selected in 2009 by the Commander to serve as USARIEM's Executive Officer. In 2010, Adam deployed with the Field Assistance in Science and Technology Team as the medical officer. Adam then moved to the U.S. Army Medical Materiel Development Activity at Fort Detrick, Maryland in 2011. There she served as the Deputy Project Manager focused on strategic plans and programs for the Neurotrauma and Psychological Health Project Management Office, which was developing clinical trials to test drug treatments for Post-Traumatic Stress Disorder and Traumatic Brain Injury. After this assignment, Adam moved to the National Defense University where she served as the Command Psychologist, developing programs in resilience and as an Assistant Professor of Behavioral Science, teaching Strategic Leadership, Industry Analytics, and Industry Studies at the Eisenhower School. From May 2016 to May 2018, Adam commanded the Cold Regions Test Center at Fort Greely, Alaska. In 2018, she served as the Director of the Telemedicine and Advanced Technology Research Center, part of the U.S. Army Medical Research and Development Command at Fort Detrick, Maryland. In 2019, Adam began her three year tour as the commander of USAMMDA.