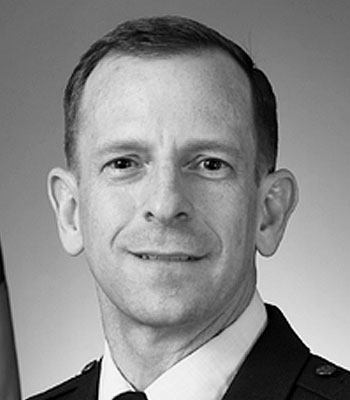 Colonel Nathan P Diller is the Director of AFWERX and the Chief Commercialization Officer for the Department of the Air Force. He leads the strategy and execution of approximately $1 billion per year across the Air Force and Space Force through AFVentures, Spark, Prime, SpaceWERX, the Small Business Innovation Research, and the Small Business Technology Transfer programs.

Col. Diller received his commission from the US Air Force Academy in 2000. After simultaneous masters degrees at Harvard and MIT, he attended Euro-NATO Joint Jet Pilot Training and flew F-16s for two Combat Air Force assignments, becoming an instructor pilot. He was selected for the French Test Pilot school and then complete his first test tour at Edwards Air Force Base, supporting B-1, B-2, F-16, F-22, and F-35 flight tests and instructing at the Test Pilot School. He served as an Executive Officer to the Air Force Scientifiy Advisory Board and as a Defense Advanced Research Project Agency (DARPA) Service Chiefs Fellow. Upon completing a program management tour at the Space and Missile Center, he commanded the 586th Flight Test Squadron, supervising classfied joint, interagency, and international flight test.

Col Diller attended the Eisenhower School, completing the Senior Acquisition Course and was assigned as the Air and Space Branch Chief in the Joint Staff J8. He then became the Assistant Director of Aeronautics at the White House Office of Science and Technology Policy and served at the office of the Secretary of Defense Strategic Capabilities Office and teh Department of the Air Force Rapid Capabilities Office. Col Diller is a member of the Acquisition Corps and is certified as a Level III Program Manager and Test professional. He is a senior pilot with over 2,700 hours in more than 50 aircraft.